What Are the Signs of Dementia?

Discover if memory problems are part of aging or symptoms of something more serious. 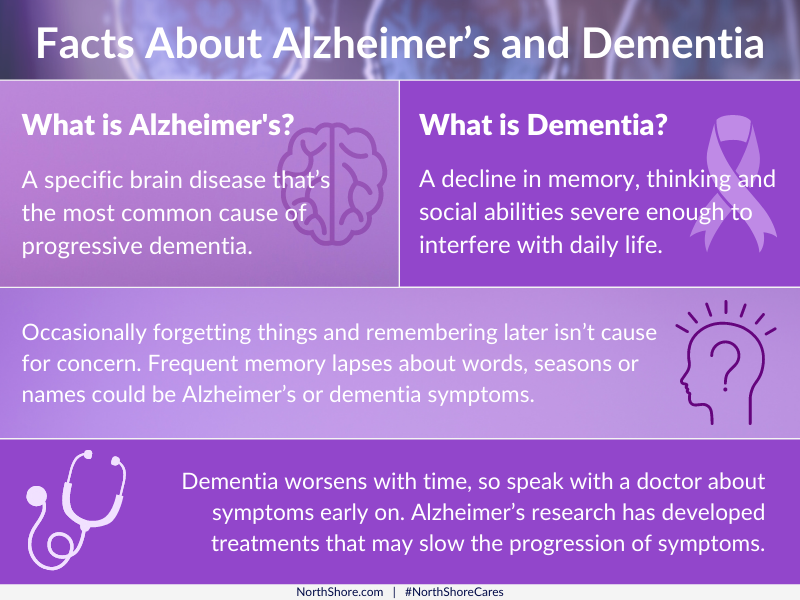 Facts About Alzheimer’s Disease and Dementia

According to the Mayo Clinic, dementia is a general term for a decline in memory, thinking and social abilities severe enough to interfere with daily life. Alzheimer’s is a specific brain disease that is the most common cause of dementia.

Occasionally forgetting things and remembering them later isn’t cause for concern. But if you or a loved one is experiencing frequent and frustrating memory lapses about names, seasons or commonly used words, these could be Alzheimer’s or dementia symptoms.

Find out more details in an article from the Alzheimer’s Association, “10 Early Signs and Symptoms of Alzheimer’s.”

Why Speaking to a Doctor Is Important

Dementia is progressive, meaning it worsens with time. People experiencing memory loss and increasing episodes of losing track of time or place have a more difficult time navigating daily life. They may also encounter more feelings of anxiety and frustration.

A doctor can help identify if the symptoms are pointing to dementia or Alzheimer’s, as well as discuss the stage and potential care plans.

Alzheimer’s research has developed treatments that may ease the progression of symptoms, according to Penn Medicine.

For more resources and facts, or to look for ways to raise Alzheimer’s awareness, visit the Alzheimer’s Association.

This information is not intended as a substitute for professional medical advice, diagnosis or treatment. Always speak to a physician or other qualified healthcare provider for advice or answers regarding a medical condition.

Blogs That May Interest You

Tips and Products to Help Someone Managing Alzheimer's & Incontinence

A Guide to Managing a Diagnosis of Dementia & Alzheimer's

Forgetfulness: It's Not What You Think